We recognise that Golden Grove Uniting Church is built on land that was originally cared for and used in various ways by the Kaurna people. We confess that the Kaurna people (along with the wider Aboriginal and Islander population of Australia) were dispossessed of their land through European settlement, as farmers and graziers extended their interests. We are thankful that the Kaurna people retain a strong relationship with their land and we respectfully acknowledge their elders.

Although many consider Golden Grove as a well-planned new housing development, it was actually settled in 1838, two years after the establishment of the colony of South Australia.

The early settlers were mostly farmers, or tended orchards and vineyards, but they were just as concerned to provide for their families, build a home, and to ensure a Christian education for their children, as many parents of today.

We acknowledge the Christian commitment, strength, vision and tenacity of the early settlers in this area.

All historical information is recorded from collections of documents including published histories, church records, and local knowledge.

The published history “A History of the Golden Grove Uniting Church – 150th Church Anniversary edition”, 2016 is available for purchase from church office.  Cost of purchase: $15.00

The first person to settle at Golden Grove was Alexander Kirk. He was born near Lockerby, Dumfries-shire, Scotland, and came to the colony in 1838 on the ship Lysander. For a time he worked at road-making and wharf-building at Port Adelaide. There, he slept in a half-ton cask, which could be turned in any direction to suit the wind and weather. He later bought some cows and squatted in the bush where Golden Grove is now. Feed was plentiful, there was no dispute about the boundaries of his run, and the milk yield was heavy. Having no horse, he carried his butter on his shoulder to Adelaide, fourteen miles. There he exchanged it for household requisites. The barter system operated as money was unavailable in the Colony.

On 7th May, 1845 he married Clementina Smart, who had arrived on the ship Ariadne. The marriage ceremony was conducted by the Reverend Robert Haining, in Sturt Street, Adelaide. Mr Kirk then bought a section of land and built his house, mostly with timber, hand-sawn from a large red gum tree that stood nearby. The Golden Wedding of this pioneer couple was celebrated in the original home, Kirklands, on 6th May, 1905. Mr Kirk was then in his 87th year.

This “Eden” was soon discovered by other settlers, including Messrs. John Byers, Peter Little, A. Dodgson, Peter McDonald, John and Charles Watson, John Smart, and Adam Robertson, who named his property Golden Grove. 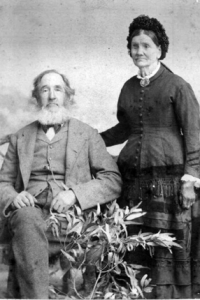 In 1846 a few of the residents met for worship in the house of Mr John Byers. A Sunday School was opened. Mr Dodgson led the singing and conducted the service, while Mr Byers acted as a teacher and superintendent. A small Day School was established in a slab hut at Cobbler?s Creek.

In January, 1849, there was a public meeting to raise funds for a public school. Mr John Watson acted as Secretary For this purpose, the late Adam Robertson had given an acre of land, whilst Mr Watson continued to seek the funds to build the first part of what later became the Golden Grove school house.

It was in this building that Sunday services were held, after the regular Sunday School [or Sabbath School, as it was then called] which had begun in 1850. The latter was conducted in the home of Mr John Byers, with John Dodgson, until the Church building later became a reality, opening in 1866.

Mr John Byers was a Sunday School Superintendent for a total of fifty years.

On 20th March in 1850, the Golden Grove School opened, under the management of the Presbyterian Church Council, and in 1849, James Anderson, later an Ordained Minister, was both Minister and school teacher. From 1853, Mr William H Humpage was installed as the first Schoolmaster. Evening school classes were held. An addition was made to the school, to include a residence, costing ?150. Mr William Anderson, followed as schoolmaster in 1854, and then, in 1861, by Schoolmistress, Miss Cate. In 1870, Mr John Holt also had an assistant teacher, Miss Bell. From1872 to 1876, Mr Randolph George Stewart Payne was the teacher.

There had been problems, recorded by the Golden Grove Presbyterian Church, in meeting the stipend of a number of their teachers, from 1849.

In 1876 it was decided that it is desirable that the school property is handed over to the South Australian Council of Education for the sum of 200.

“We whose names are hereafter appended, being professing Christians, and formerly belonging to several sections of the church and others who have been brought out of the world by the varied gospel instrumentality, employed in this neighbourhood, and elsewhere, do hereby voluntarily form ourselves into a Christian Society. We do this for the Glory of God, the good of our fellowmen and for our individual and mutual benefit.” 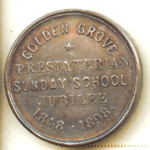 In 1898 the Golden Grove Sunday School celebrated its Jubilee, and was given a Medallion, on a Certificate, to remember this occasion.

There is a copy of one in our Historical Cabinet at the Golden Grove Church.

Land for the church

In 1864 Capt. John Robertson, on behalf of his late father Captain Adam Robertson (who passed away in the same year), gave a site for a Church on the north?west corner of Section 5458 within a stone?s throw of the school and public cemetery.

The Church dimensions were length 40′, in the clear by 28′ in width, height of walls from the ground 15′, two rooms to be built at the end for a vestry and sitting room.
The building cost £550.

All internal fittings were made and fixed by Mr. Joseph Blake, of Smithfield

Laying of the Foundation Stone

This document is deposited under the corner-stone of a new edifice to be erected for the use of the Presbyterian Church, Golden Grove, to the praise and honour of the one only God, ever blessed Father, Son and Holy Spirit, to whom be glory and dominion for ever and ever.
The stone is laid by the Rev. Ralph Drummond on this 24th day of July, 1865 being the 29th year of the reign of Her Most Gracious Majesty, Queen Victoria, and the 29th year from the foundation of the Colony, and the fourth year of the Governorship of Sir Dominic Daly.